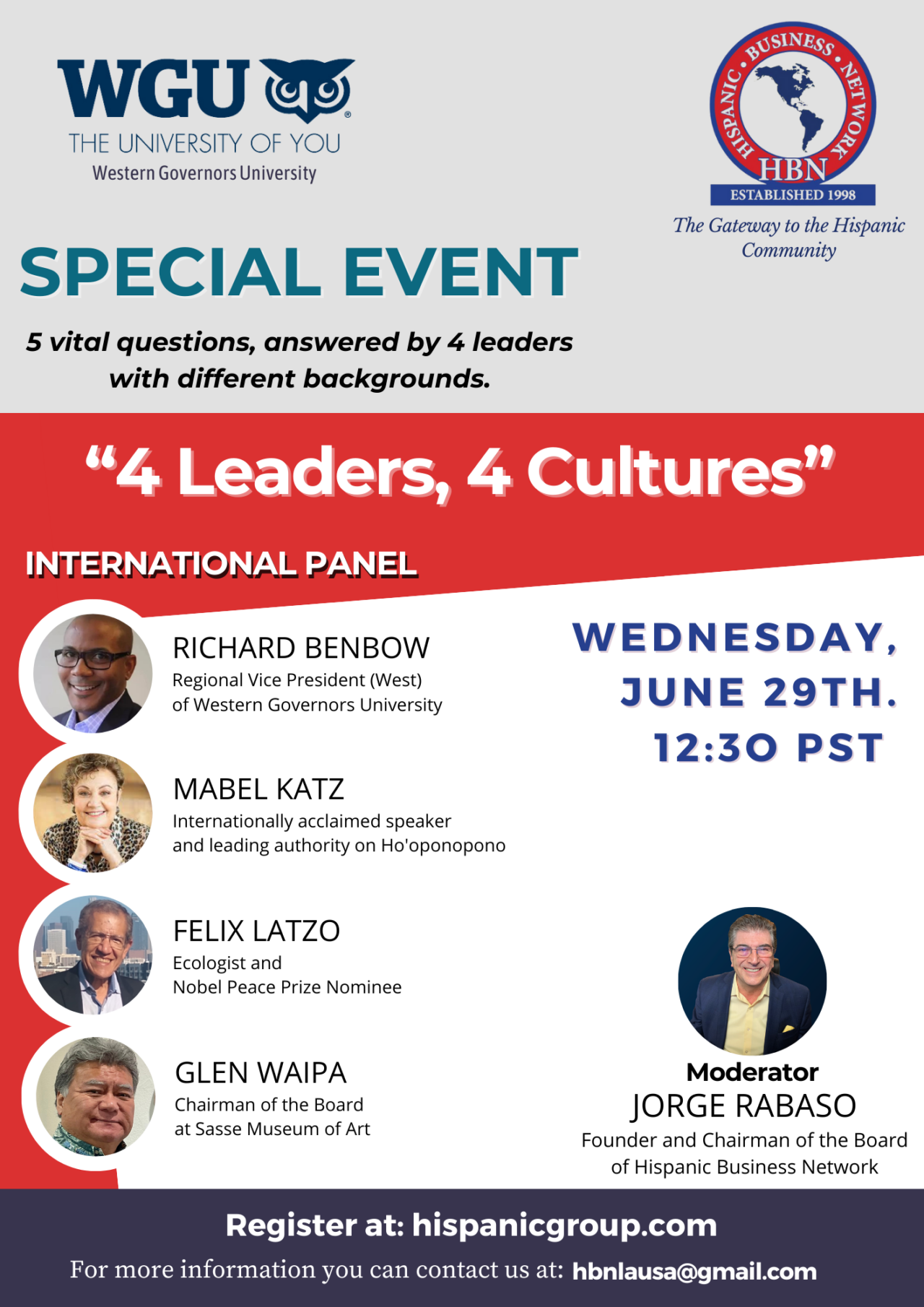 SUPER EVENT  together with Western Governors University and an amazing panel formed by extraordinary leaders from different cultures.
During the event, each leader will answer different questions, based on their customs, breeding and experience.

This is a great opportunity to grow, motivate ourselves and learn from them.

Current Regional Vice President of Western Governors University. His distinguished career spans the public, private, and nonprofit sectors. He was most recently the Chief Officer of Government and Community Relations for the University of California, Los Angeles (UCLA), where he drove strategies and efforts for the advancement of UCLA through legislation, policy, regulation, and relationship building. His previous roles include Senior Director of External and Government Affairs at Time Warner Cable and Senior Manager of Franchise Administration and Constituent Services for the City of Los Angeles.

Benbow is active in his community, most recently serving on executive boards for the Los Angeles Area Chamber of Commerce, the City of Los Angeles Workforce Investment Board, and the Valley Industry Commerce Association. He has served as a board member for the Harbor City Boys & Girls Club and was an advisory board member for Urban Media. He also assists young aspiring college student-athletes, coaches youth basketball and football, and serves as a mentor.

Dame Mabel Katz is an internationally acclaimed speaker, author, and seminar leader who is recognized as a leading authority on Ho’oponopono, an ancient Hawaiian art and practice for achieving greater clarity of purpose and living as well as working more effectively. She has crafted a series of keynotes, talks, and seminars for corporations, businesses, and individuals – including seminars for children – that apply the practices of Ho’oponopono to bring companies closer to their full potential and give people an edge at work and in all areas of life.

She has spoken in front of national senates and other influential government bodies, and has presented at the United Nations, as well as addressed multi-cultural audiences, including those of diverse ethnicities in the Middle East. In 2013 she was recognized for her humanitarian works by being knighted in the venerable Order of the Orthodox Knights Hospitaller of St. John – Russian Grand Priory, bestowing upon her the title of Dame Mabel Katz.

Mabel was also rapidly acclaimed for her work in support of world peace. Honored with the prestigious 2012 Mil Milenios de Paz Peace Flag, acknowledging her world-peace initiative, Peace Within is World Peace, she was officially recognized as one of the world’s preeminent Peace Ambassadors and on January 1, 2015 she was awarded the prestigious Public Peace Prize.

He was nominated for the 2020 Nobel Peace Prize for presenting a solution to save the planet, working alongside school children around the world. He assures that “there is no longer time to lose”.

Retired law-enforcement officer with experience in crime scene investigation and crime scene photography. He is the Chair of the board of directors at Sasse Museum of Art. (AKA Inland Empire Art Museum) and a photographer. His love for photography began in high school and his work added a technical aspect to his expertise. Currently, his interests are fine arts and commercial photography.

Mr. Waipa sees his photographs as modern Realism, abstract and asymmetrical yet depicting inanimate objects in a life-like situation. He is interested in the textures and shapes of the objects and how they create visual interests with lights and shadows.